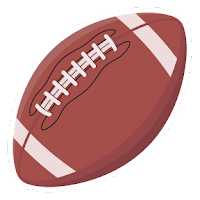 The home team, the Walla Walla Wolves (a fictional team), won the toss and elected to defer. So they will kick off the ball to start the game. The kicker kicks the ball and it goes into the end zone and out the back of the end zone. This is a "touch back." Play starts on the 25 yard line. It's 1st and 10. The Pasco Ponies (another fictional team) lines up behind the line of scrimmage. The center snaps the ball to the quarterback, he drops back and throws a long "bomb" to a wide receiver down the field. But the receiver can't catch the ball.  It's 2nd and ten. The Ponies line up again. This time the quarterback hands it off to a running back who gets seven yards past the line of scrimmage before he's tackled. It's 3rd and 3. The Ponies again line up. And again, the running back gets the ball. He runs four yards past the scrimmage line before he's brought down. It's now 1st and 10 on the 34 yard line.

The Ponies get ready to play again, lining up behind the line of scrimmage. But before they get the play off, an official throws a flag. Because of crowd noise, the Ponies were "off sides." They get a five yard penalty. Now it's 1st and 15 at the 29 yard line. The ball is snapped again and the quarterback hands it to a running back. But he's tackled at the 28 yard line. It's now 2nd and 16. The next play the Ponies try a pass, but the defensive players make it to the quarterback and "sack" him on the 25 yard line. It's now 3rd and 19. Wanting to be conservative and not risk an interception, the Ponies run the ball again and the running back gets a good eleven yards before he's tackled. But it's now 4th and 8 on the 34. So the Ponies punt.

The ball goes to the 5 yard line on the opposite side of the field and is "downed" by a Ponies player. That means he stops it from going farther. He will only do this if he's worried it'll go into the end zone and cause a "touch back."

The Wolves run another play, this time they "run the ball" and the running back gets tackled three yards past the line of scrimmage. It's 2nd and 7 on the 22 yard line. Again the Wolves throw the ball and the receiver catches it and runs toward the end zone. He's forced out of bounds at the 45 yard line (the Wolves' 45 yard line, the one between the 50 yard line and their end zone, which remember, is behind them). It's 1st and 10 again.

Again the Wolves run the ball, and the running back makes it to the 45 yard line on the other side of the 50 yard line. This is called "being in Ponies territory." It's 1st and 10 again. Another run but this time there's a flag. A Wolves player is called for holding. The player protests but it does no good and the Wolves are knocked back 10 yards to the 45 yard line on their side of the 50 yard line. It's 1st and 20 now.

The Wolves pass the ball and the wide receiver catches it. He's tackled at the 46 on the Ponies side of the 50. So it's 2nd and 11. Again, the Wolves throw the ball, this time the receiver is "wide open" and he catches the ball and runs to the ten yard line before he's brought down. It's 1st and goal at the 10. Two more plays and the Wolves get the ball into the end zone and score six points. Their point after touchdown (PAT) attempt is good. The score is 7-0.

This should be enough information to get you started watching college football. Once you start watching, you'll realize the power and grace of it.  Pick a team to root for and it's a lot more fun. Or frustrating (I wouldn't pick Oregon State). And college football is so much more fun to watch than baseball, any day. I can't wait for the season to begin this weekend. (Technically, the season began on the 24th with two FBS games: Florida vs. Miami of Florida* and Arizona vs. Hawaii. That was called "week zero." There are also games tonight.)

The University of Washington Huskies of the Pac 12 conference, the team I follow, play at noon PDT on Saturday against Eastern Washington. Eastern isn't going to be a push-over even if they are an FCS team. They were almost the FCS champions last year. It will be shown on the Pac-12 Network.

*There's a Miami of Ohio so you have to distinguish between the two.