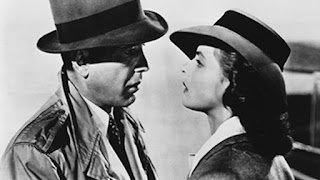 I re-watched the move Casablanca recently. I'm not sure how many times I've seen this movie. But this time I especially paid attention to the writing. This movie is written amazingly well. There's not a wasted word or comment. And there are many memorable lines that people still quote to this day, even 76 years after the film's release. One of my favorites (I'm not sure why) is when Rick talks about the Germans marching in Paris. Speaking to Ilsa he says, "I remember every detail. The Germans wore gray, you wore blue."

But there were so many memorable lines. One that get's used often (even by people who probably don't know its origin) is feigned surprise saying "I'm shocked, shocked." The full line is: "I'm shocked! Shocked to find that gambling is going on in here." It's spoken by Claude Rains playing the lovable but slimy Captain Renault. And right after he says it, he is handed his "winnings" (bribes) for the evening.

Rick was, of course, played by Humphrey Bogart. Ilsa was played by a young Ingrid Bergman. The acting was never over the top, as it could be and sometimes was in old movies. And each shot by director Michael Curtiz is exquisite. I can't imagine the movie being any better if it were in color. In fact, it probably wouldn't work.

Casablanca was made during the days of the "studio system" when actors, writers, and directors all worked for one studio. That is all came together on this movie is amazing.

Yes, the airplane is obviously a model when it's flying. The movie was made during World War II and aviation fuel had to go to the war effort, I assume.

There's a reason this movie is so revered. It deserves all its accolades. There is literally nothing I would change about it.
Posted by S. Evan Townsend at 6:00 AM