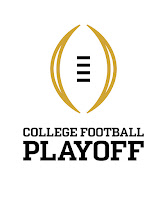 Yesterday the College Football Playoff (CFP) committee rankings came out. I expected the University of Washington Huskies to move up after defeating Washington State in the snowy Apple Cup. I was hoping that, like the AP poll, they would move into the top ten. But they are #11, now, in the CFP. But, the good news is that the top twelve teams go to the big six college football bowls normally held on New Years Eve/New Years Day (three will be played on Saturday December 30th this year so as not to conflict with NFL games on Sunday the 31st).

The Washington State Cougars fell from #8 to #13, just missing the big six bowls.

Now Washington has to beat Utah in the Pac-12 Championship game. That game is Friday at 5:00 PM PST (8:00 PM EST) on Fox. We already beat Utah early in the regular season but the Utes have a different quarterback and teams tend to improve during the season. So I expect this to be a tough, hard fought game.

The final CFP rankings come out at noon Pacific Time Sunday. So we'll know more then.
Posted by S. Evan Townsend at 10:37 AM