NaNoWriMo (or National Novel Writing Month) is where many writers try to write a novel (or at least 50,000 words of a novel) in November. That's a writing pace of about 1,667 words per day. The goal is to get people past "I can't write" into "just write, damn it." It's the embodiment of what I say to writers: "Just keep writing."

I have this friend who wants to write. She started writing a novel a couple of weeks ago. We joked she was starting NaNoWriMo early. But she stopped writing because she doesn't want to write "crap." The mistake she's making (and I can't seem to convince her otherwise) is that she wants her first draft to be perfect. 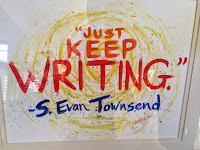 But your first draft is not going to be perfect. That's why it's called a "first draft." As Hemingway said: "The first draft of anything is shit." You can revise and fix a first draft but, first, you have to write the damn thing. So "Just Keep Writing."

So I like NaNoWriMo because it forces me to just keep writing. I may write "crap" but I fix that later.

I think a lot of writer's block comes from wanting perfection from your first draft. But you'll never achieve that.

Write it down, fix it later.

What I dislike about NaNoWriMo is a number of "writers" write their first crappy draft, then think they are done. They don't revise, edit, revise and edit some more. They put it out on Kindle (just in time for Christmas!), call themselves "indie authors" and think they have written War and Peace. Then people might read their books, say "wow, this is crap," and all indie authors get a reputation for putting out crap when I know a lot of indie authors that put out very good work.

Last year the NaNoWriMo webpage gave a "badge" for promising to revise your novel. So I'm hoping a lot of people took that to heart and did.

And "NaNoWriMo" is a bit of a misnomer because it's really international now. So it should be InNoWriMo. But I doubt they'll change the name.