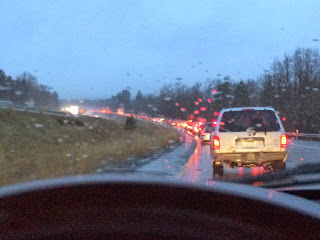 Every since I first experienced traffic jams on a regular basis when I moved to Seattle in 1980, I've never quite understood them or what causes them.  I don't know if anyone has really researched them.  They seem to be often a physiological phenomena as much as a function of over-crowded roads.

For example, a freeway in the Seattle area, SR 520 (we don't name our freeways up here), had three lanes going westbound (into Seattle from the 'burbs), one of them an HOV lane (car pool lane).  And every weekday morning there was a jam on the freeway for miles.  Here's the weird thing.  When the freeway crossed Lake Washington (on the Evergreen Point Floating Bridge) it dropped to 2 lanes.  Did traffic get worse?  No, it often opened up and was no longer jammed.  Why?  I had two theories: 1) traffic merging off the HOV lane or and 2) there used to be toll gates right before the bridge and people were so used to jamming up there they still did.  (The toll gates were removed 1979, there were no tolls for years, now they are tolling again automatically to pay for a replacement for the 50-year-old bridge.)

In the evenings going eastbound (out of Seattle into the suburbs of Bellevue and Kirkland), the traffic would jam up to (you guessed it) the former toll booth plaza then open up.  Same number of cars, same number of lanes.

Last night I was driving to Seattle on Interstate 90 and suddenly traffic went from about 70 mph to stop and go.  Same number of cars and same number of lanes.  And the same rainy weather.  The picture above was taken during that jam last night.  It took us 70 minutes to go 30 miles for an average speed of 26 mph (on rural interstate with a speed limit of 70).

And then there's the other question about traffic jams: why is the lane you're in always the one moving slower?
Posted by S. Evan Townsend at 8:57 AM