There and Back Again . . . to Seattle 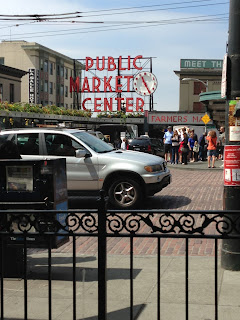 For a late birthday present, I went to Seattle on Friday.  I wanted a summer/tropical hat and the only good hat stores I could find online were in Seattle.  Luckily, they were all in walking distance of each other and Pike Place Market.  The drive over was beautiful until we got over Snoqualmie Pass then low clouds dominated.  They were so low I joked that they were almost more like high fog.

The low clouds got less low as we got to Seattle.  I missed an off-ramp on I-90 and so ended up going down by the football and baseball stadiums and through Pioneer Square where I got a taste of Seattle gridlocked traffic.  Finally we got to the parking garage behind Pike Place Market.  It wasn't very crowded so I figured the market would not be very crowded.


Boy was I wrong.  Living in a small town these past 14 years I was almost taken aback at the throng of people.  And there were people of many colors, sizes, shapes.  I smiled because I realized how much I missed having a diversity of people around.  We walked to the hat store I decided from internet research was most likely to have what I 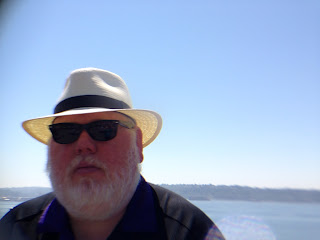 wanted (and walked past another and a quick glance inside told me it wasn't going to be good).  I found a hat I really liked.  I thought about going to the third hat store on my list but the woman at this hat store said they probably wouldn't carry my size (I have a rather large head).  I'd read on the internet that someone else said they didn't carry large sizes so I decided she was probably telling the truth and bought the hat.  I really like my new hat and wore it most of the day.

Eventfully, about 11:30 A.M., the clouds burned off and we had blue sky.  And I really enjoyed people watching in Seattle.  There were just about everything you could imagine.  We saw one young man in a business suit with a purple tie.  But his hair color matched the tie.

After lunch overlooking the bay (with really slow service) and exploring the catacombs of the Pike Place Market a bit, we decided to go to Bellevue Square to have dinner.  We could go to Bellevue Square (an upscale shopping mall), goof around, and then go to dinner.  Which is pretty much what we did.  But getting there was a pain.  I thought traffic was bad getting to Pike Place.  Getting out was horrible.  Traffic was gridlocked and gridlocked on Seattle's steep hills.  I was so thankful for an automatic transmission.  At the I-5 and I-90 interchange an Tesla Roadster coming up behind me (impressed myself by recognizing it in my rearview mirror; I'd never seen one in the wild before).  Now as much as I disdain electric cars for their miniscule range, exorbitant price, and dubious benefits to the environment, I have to admit that Tesla could squirt through traffic.  Electric motors have a lot of torque whenever you need it and if the driver saw a gap, he would shoot into it.  And it was a prettier car than I expected.  Still wouldn't buy one.

Dinner in Bellevue was great, and we drove home, getting there late and tired.  But it was a fun day.
Posted by S. Evan Townsend at 11:34 AM